Should the music industry be more environmental? Featuring music from Kitty Got Claws.

Musicians and festivals are often at the forefront of discussions around sustainability, but their own environmental impact are often significant.

While the live music industry has been particularly hard hit during COVID, is this a moment for us to implement new practices and reinvent the way live music operates to be more sustainable?

Kitty Got Claws
Kitty Got Claws - the performance name of Eva Hicks - is a rapper, singer and spoken word poet. Her dark and impactful writing and performance intends to break stigma surrounding mental health using stories and narrative. Her work has received radio attention, most notably through airtime on BBC Introducing and being the featured artist for 2 weeks on Camglen Radio (Scotland). She has performed at festivals, coffee shops, pubs, live music venues and mental health conferences up and down the UK.
Facebook
YouTube

Music Declares Emergency is a group of artists, music industry professionals and organisations that stand together to declare a climate and ecological emergency and call for an immediate governmental response to protect all life on Earth. We believe in the power of music to promote the cultural change needed to create a better future.

Full Time Hobby was set up by Nigel and Wez in 2004. They had met while working for Mushroom Records / Infectious Records and decided to start a label when it was clear that Mushroom was going to sell out to Warners. Inspired by labels like the original Jac Holzman era Elektra Records, Creation Records and Rough Trade Records they wanted to start a label that championed original and creative new music that they loved and did not see finding a home elsewhere. The label is and always has been wholly independent.

"Like a lot of people, we at Full Time Hobby are terrified about the impending catastrophes caused by the Climate & Ecological Emergency. We’re just music fans releasing albums by bands we love, though - what can we do about it? It is clear that widespread change must come from our governments and the fossil fuel companies, but we don’t want to sit on our hands and wait for that to happen. We are trying to change how we operate bit by bit. We know we’ll get it wrong sometimes and we’d appreciate any feedback about how we can do this better, or ideas we’ve missed. The music industry is no different from any other industry in that it is going to have to change a lot over the next decade if we’re going to stick around and give our children and grandchildren a fighting chance. We also recognise that those who are hit first and hardest are those already struggling with poverty, in countries such as Bangladesh and those countries that fall within the Sahel region of Africa. This is not a marketing campaign, by the way. We’d rather just get on and do these things and not make a big deal about it as we’re sick to death of companies greenwashing. However, we hope that by making our thoughts and our actions public, other labels, artists or music fans will be encouraged to make changes in the way they behave. We are not perfect but we would rather give it a go than sit and moan."
Twitter
Instagram
Facebook
Website
Hassle Records

Laura Hussey
Laura is a student violinist with a diverse range of interests, planning to study at music college in London from September (ar the Guildhall School). Very excited about the future of creative music making and exploring ways to use music to spread a message.
@ laurhussey

John Marshall-Potter John is co-founder of FolkEast. His experience spans thirty-plus years and various roles at every major UK festival, starting out as the site electrician at Knebworth for Led Zeppelin in 1979. He’s a long-term promoter too, and was booking folk-legends like Martin Carthy and Dave Swarbrick into long-lost clubs and pubs in East Anglia 25 years ago, so he’s no stranger to the genre. He and Becky’s vision for Folk East is the culmination of that experience and a natural step from the Albion Fairs where lots of genuine bartering of arts and crafts took place.
Website
Facebook
Twitter
Instagram

River Codrington
River is a 16 year old singer/songwriter, trombone player and music enthusiast based in Suffolk. River is an active volunteer for Extiction Rebellion and was a key organiser of 2019’s SchoolStrikes4Climate, as well as being an artist declarer with Music Declares Emergency. As well as studying jazz and classical trombone, he released an EP in February under the artist name NWRVR and on National Earth Day 2021 (22nd April), NWRVR will be releasing a single about the climate emergency from a young person’s perspective. River is currently in his GCSE years and hopes to study film composition at conservatoire post-18.
Instagram: @nwrvr_ 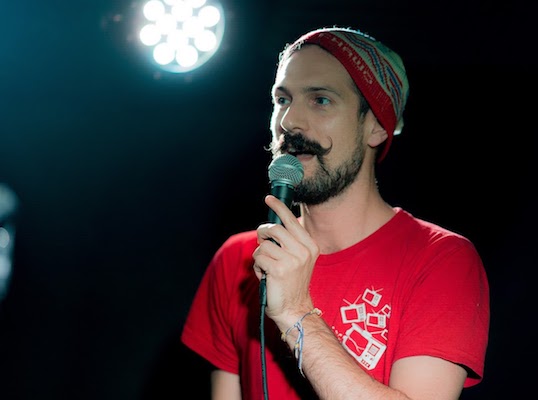 Russell Arnott
Russell has 20 years experience performing as a punk guitarist and singer with bands such as The Riots, Hunting Lodge and Cautionhorses, plus time spent organising DIY gigs in Brighton. He toured Europe - particularly eastern Europe - four times, including transitioning from touring using flights and vans to using public transport instead.
Cautionhorses Bandcamp